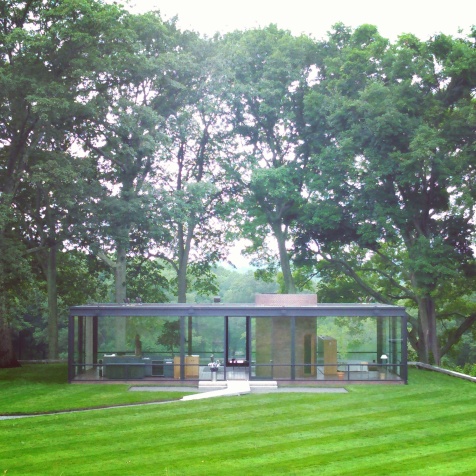 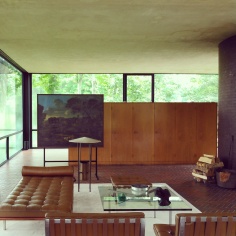 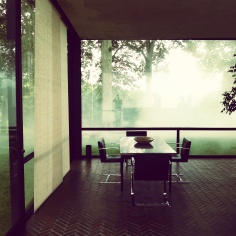 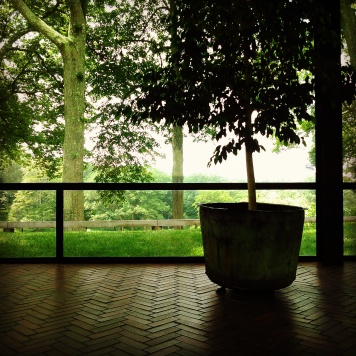 Of Metro-North’s five lines — three east of the Hudson River, two west — only the New Haven Line, most of which hugs the north shore of Long Island Sound in Connecticut, has branches. Three, in fact, named after the towns in which they terminate: Danbury, Waterbury, and New Canaan, which is the shortest and westernmost. Unlike the terminuses of the other branches, where the poor economic fortunes of southwest Connecticut are more apparent, New Canaan is a picture-perfect New England town of charming buildings, quaint restaurants, and upscale shops. In the woods surrounding the town, low, hand-built fences of irregular stones divide lots and fields. One senses that perhaps time has stood still for a century or more in this little patch of Fairfield County. (And let’s be frank: one also senses that this place is rather WASP-y, where polo shirts in light colors with upturned collars and cable-knit sweaters folded around the shoulders are always in style. As long as they’re cream or navy blue, of course.)

So it is perhaps surprising that in this setting is found one of the most innovative and celebrated houses constructed in the twentieth century. The renowned American architect Philip Johnson — the designer behind such New York City landmarks as the modernist Seagram Building and the postmodern AT&T Building (today known as the Sony Building) — chose this spot to build his own residence. The exterior walls, except for the steel columns that hold up the roof, are constructed entirely of large sheets of glass, and the single-room house is transparent except for a cylindrical brick bathroom near one corner of the house, giving the house its name: the Glass House.

All tours start at the visitors center in central New Canaan, right across the street from the decidedly traditional train station, and the only way to access the property is via the visitors center’s shuttle bus. I decided to book the “Glass House + Galleries” tour, which included not only the house itself but several of the outbuildings on the property, including the underground Painting Gallery, the rather stunning Sculpture Gallery, and the gatehouse, called Da Monsta, which looks a bit like it was copied out of a Picasso painting.

The house is a rather fascinating exercise in the organization of space, since it is all, except for that bathroom, a single room. Nonetheless, it has a clearly defined kitchen, dining room, living room, and bedroom. (Mr. Johnson himself referred to the separate areas as “rooms” and noted that the layout was no different from a house in, say, the colonial style.) Surrounded entirely by glass, I expected to feel too exposed while in the house, a bit like being on the beach without an umbrella. But the house actually feels rather private. It helps that the grounds are extensive, so the neighbors aren’t too close, and the completely transparent walls invite the outside into the house rather than turning the house inside out. Indeed, the National Trust for Historic Preservation notes that “The Glass House is best understood as a pavilion for viewing the surrounding landscape.” It also helps that the roof is opaque.

The furniture — some of which was designed by pioneering modernist architect Ludwig Mies van der Rohe — is, expectedly, simple, modern, and restrained. This is not a space for clutter. Beyond the furniture, there is no interior decor beyond a couple of plants, a freestanding sculpture, and a painting, supported of course on a stand, since there are no walls on which to hang. In all, the house 16.8 meters (55 feet) long, 10.1 meters (33 feet) wide, and 3.2 meters (10.5 feet) high. It was completed in 1949 and has remained virtually unchanged — and unaged — since.

Mr. Johnson passed away in the house at age 98 on 25 January 2005, upon which ownership transferred to the National Trust for Historic Preservation. The house itself was declared a National Historic Landmark in 1997, perhaps a bit ironic for a building whose function is to disappear in the surrounding landscape rather than stand out. But totally appropriate for a building that opened Americans’ minds and hearts to an entirely new form of architecture that has influenced placemaking for generations. It is just as relevant and eye-opening today as it was when Mr. Johnson first called it home 65 years ago.

Some information in this article is from various Wikipedia articles as well as the official website of The Glass House.

One thought on “The Glass House”