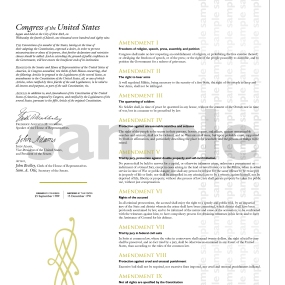 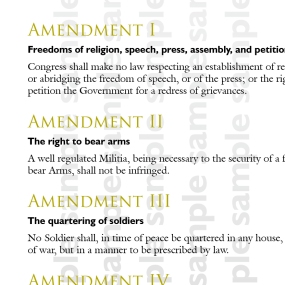 In 2014, America will mark the 225th anniversary of its charter of basic freedoms, the Bill of Rights. And more than two centuries on, these first ten amendments to the Constitution of the United States are more important than ever.

In fewer than 500 words—462 to be exact—the Founding Fathers, led by James Madison, specified some (but not all) of the rights that were so hard-won and that we have come to take for granted: the freedom of religion and the separation of church and state; trial by a jury of our peers; protection from unreasonable searches and seizures and cruel and unusual punishment; and the all-important freedoms of speech, the press, assembly, and petition.

Through a brutal Civil War, numerous Supreme Court decisions, the Civil Rights and Women’s Rights movements, and the ongoing fight for liberty and justice for all, these freedoms have been extended to all American citizens, regardless of the color of their skin, where their ancestors came from, or what state they live in. The Bill of Rights is truly a living document that impacts the lives of every single American every day.

Be reminded of the rights you enjoy as a citizen of the United States—the rights fought for on fields of battle, in the halls of Congress and the courtroom, and by ordinary people like you and me. This 18- by 24-inch poster presents the complete Bill of Rights, including the preamble of the enrolled version passed by Congress and submitted to the states for ratification, beautifully typeset in readable, modern type. Explanatory notes clarify the rights guaranteed by each amendment as well as the dates of passage by Congress and ratification by the states.

The basic version, which includes the ten amendments ratified in 1791 that became the Bill of Rights.

This poster complements those of the Declaration of Independence and the Constitution, also available in our shop.

Celebrate America’s rich heritage of freedom with this display-worthy print of the Bill of Rights, perfect for display at home, in the office, or in the classroom.

The complete text of the Bill of Rights set in readable, modern type, printed on high-quality paper with a semigloss finish

Extended version: The first ten amendments plus Article the First and Article the Second (Amendment XXVII)—see description at left for more details Add to cart »