Susan and Dustin’s visit to the Statue of Liberty­—and all the way to her crown—was a bucket-list moment: something Dustin had waited his whole life to do. 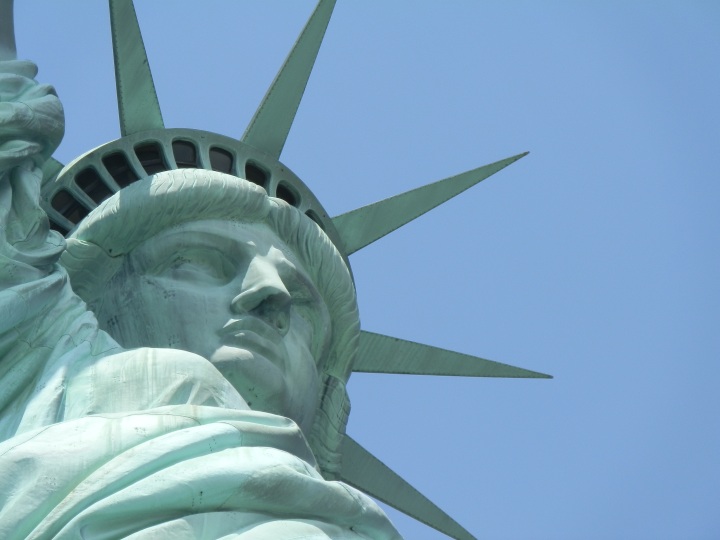 I am one of those people who have a bucket list—a list of things I want to do or see at least once—even if my list isn’t written down anywhere and is only roughly defined. But there are some things that are definitely on that list. Visiting the capitol of every U.S. state and riding every rail system in the United States and Canada are two that come to mind.

Regardless of how my bucket list is defined, visiting the Statue of Liberty, and going all the way to the crown, was certainly on it. And this month—on Independence Day, no less—I was able to cross it off.

Last October, when Hurricane Sandy made a direct hit on New York City and the surrounding region, the Statue of Liberty itself escaped virtually unscathed, but Liberty Island did not. The dock where ferries from Manhattan and New Jersey dropped off visitors was destroyed, as was much of the island’s electrical system and other infrastructure. The island and the statue were closed to visitors, and temporary lights and generators were brought in to illuminate the monument at night.

Hurricane Sandy made landfall on 29 October 2012, one day—yes, just one day—after the Statue of Liberty reopened to the public following a yearlong renovation and restoration project that began on 29 October the previous year, one day after the statue’s 125th anniversary.

This was the latest chapter in the tumultuous recent history of allowing visitors access to the crown. The statue and the island were immediately closed following the terrorist attacks of September 11, 2001. The island reopened to the public by the end of 2001, and the pedestal reopened in August 2004, but the statue remained off-limits throughout the Bush administration due to safety concerns (the difficulty of evacuating in an emergency, which, frankly, is understandable). The Obama administration reopened it as a “special gift” to America on 4 July 2009, with a daily limit on the number of people allowed to access the crown.

When the opportunity to be among the first to visit the Statue of Liberty and go to its crown following Hurricane Sandy popped up on 8 May—I just happened to notice a post in my Facebook News Feed that morning—I jumped at it. It was pretty much the best $40 I’ve ever spent. And it was, quite possibly, the best Fourth of July ever. —Dustin

Susan inside the head of the Statue of Liberty.

Dustin inside the head of the Statue of Liberty. 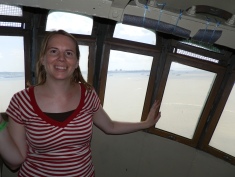 Susan inside the head of the Statue of Liberty. 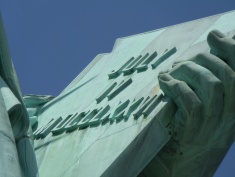 The tablet the Statue of Liberty holds in her left hand, inscribed ᴊᴜʟʏ ɪᴠ ᴍᴅᴄᴄʟxxᴠɪ, the date of America’s independence—July 4, 1776—in Roman numerals. 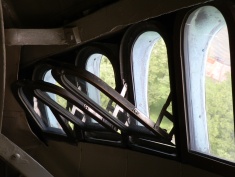 Windows in the Statue of Liberty’s crown. 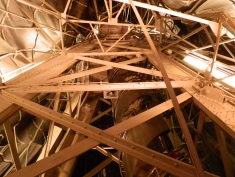 The statue’s original torch, now on display inside the statue’s base. It was replaced during restoration work at the time of the statue’s centennial in 1986.

The Statue of Liberty’s face from the inside. 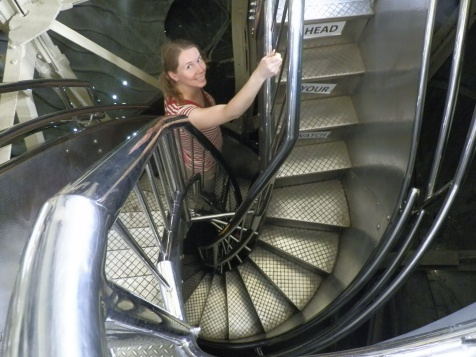 These two tightly wound spiral staircases carry visitors to and from the crown of the Statue of Liberty. One is for going up; the other for going down.

New York Harbor and the Manhattan skyline from the parapet at the top of the Statue of Liberty’s pedestal.