Susan finds not just one but two teeth in Fiona’s mouth. In other news, Fiona learns how to climb stairs, clean up after herself, and find essential items in the dark. 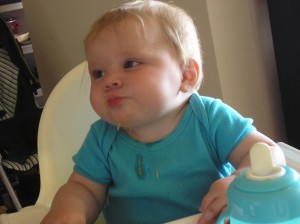 Big developments this week! Last Wednesday evening, I was feeding Fiona some peaches when I noticed that the spoon seemed to be hitting something hard in her mouth. She’s extremely uncooperative when it comes to mouth inspections, so I tried to poke around with the spoon for confirmation before I tried with my finger. Sure enough, there was a little tooth in there! It was barely visible on the rare occasions that she opened her mouth wide enough to see, but definitely a tooth. We’ve suspected that another one might have sprouted in the last few days, but it’s hard to tell. Last night I actually spied them both. They’re the bottom ones. The strange thing is that she never seemed to have any of the classic teething symptoms (well, she did about five months ago, but no teeth then). She hasn’t been chewing on stuff more than normal, or drooling more than normal, or been cranky.

On Sunday at church, she tried out the stairs. I’ve been wondering when she would attempt them, but since we rarely have access to stairs, she doesn’t have much opportunity. We sat in the front row so she would have plenty of space to crawl around, and suddenly she spotted the steps up onto the stand, and she took off. I thought she would need a boost or some suggestions about what to do with her knees, but she climbed up three steps with no problem. Then she kept crawling to the next set, and climbed and climbed until there were no more (they all come in sets of two or three, so it wasn’t that many). Then she played around a little bit with some chairs up there, and headed back down. This time, I was certain she would need some help, since she was crawling down face-first. But, actually, she did just fine. I was there to grab her in case she slipped and did a face plant, but she put her hands down very gingerly and slithered right off. Very impressive.

The third big development was last night. I’ve been showing Fiona for months how to put things into containers, but she has never been interested in it herself. I put stuffed animals in a basket, and she takes them out and leaves them. Blocks in our army surplus helmet—she takes them out one by one and leaves them. But last night, I put a few small blocks into a measuring cup she was playing with. She picked one up and put it on the ground, but the next one fit too well in the cup, and she couldn’t grab it. So she picked up the cup and dumped it out—the first time she’s intentionally dumped something out! Then, adding to our astonishment and pride, she picked one of the blocks up and put it, very deliberately, back into the cup. We cheered and clapped for her, which she thought was pretty funny.

What amazes me most is how she learns these things all of a sudden. She doesn’t practice and struggle with it until she gets it. It makes me think she’s waking up in the middle of the night to practice secretly. I think this might be somehow connected to her cousin’s baby assassin training camp, but Fiona hasn’t breathed a word of it to us.

One last thing. This just happened a few hours ago. Fiona has this fleece—you’ve all seen it; it’s the dark green one her cousins used to wear. Well, it’s now Fiona’s best friend (alongside her pacifier). In the wintertime, she got used to always wearing it when she went to sleep. These days, though, it’s far too warm to wear a fleece, so we just put her in pajamas and plop her in her crib. Sometimes we let her hold the fleece until she falls asleep, and then we take it away for safety. Tonight, I put her in her crib and figured she could probably do without the fleece, so I put it on the chair next to her crib. She fussed and cried for a little while after I closed the door, and I thought I might have to go in and convince her to lie back down, but she got quiet pretty quickly. About half an hour later, I went in to look at her. She had gotten up, reached through the bars, found the fleece (in the dark!), and pulled it into the crib. She was sleeping soundly with her arms around her friend.