Fiona gets banished from the bathroom, learns to “cruise,” rides in a car for the first time—and, to our relief, decides she likes the bus and subway more. 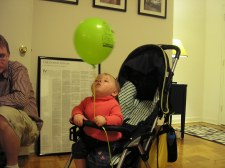 Fiona and her first balloon 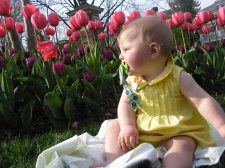 In the tulips at Marriott Wardman Park, Washington, D.C.

In the tulips at Marriott Wardman Park, Washington, D.C.

Fiona continues to be amazing. She is so adept at crawling around and pulling herself up. She has learned to clap and wave and play her pacifier like a trumpet. She even picks up books to look at them, rather than chew on them.

The bathroom is her favorite room. She’s not allowed in there most of the time—we have to keep the door shut, because she likes to bang on the scale, climb over the scale and play with the plunger, chew on the toilet seat, knock the trash can over and pull out all the contents, unroll all the toilet paper (and tear it into teeny-tiny shreds), and open up the cabinet under the sink and remove everything. It was very impressive to see her figure out the cabinet—it’s not that easy to open when your arms are only eight inches long. She has it down now, and knows exactly where to sit so she will be able to pull it open without needing to move. That, of course, is why she’s not allowed in the bathroom unsupervised. But she knows what the bathroom door sounds like. The other day, she was lying on the dining room floor having a bottle (she can hold them herself, but only when she’s lying down), and I opened the bathroom door. A split second later, I heard her bottle hit the ground, followed by excited puppy-dog panting and the slap-slap of little hands crawling as fast as possible to see if she could get there before I shut the door.

While we were on the train to Chicago a few weeks ago, she learned to “cruise,” which apparently is what it’s called when babies pull themselves up to hold onto a chair (for example), then move over to hold on to something else. She doesn’t do it very often, though. She also decided that she likes sleeping on her tummy. I thought it might have just been the rocking of the train that sort of knocked her over when she was lying on her side, but now she rolls over pretty regularly when she sleeps.

On our trip, we had to rent a car to go from Birmingham to Montgomery and from New Orleans to Baton Rouge (to see the state capitols). So that was the first time that Fiona rode in a car. She didn’t like it at all. She hadn’t been strapped into her car seat in months, and she does not like being restrained, as you might imagine. She cried and wailed, and even singing “The Eensy Weensy Spider” didn’t help. But finally, she went to sleep. That became her coping mechanism every time we drove anywhere. It worked out pretty well, since she refused to sleep in her stroller as we were exploring—she was too interested in everything to close her eyes.

But we are now back to the bus and subway. On the bus a few days ago, Dustin lifted her up to the bar that people hold on to, and she grabbed on and did a pull-up. She just held on, pretty much all by herself. I think we’ll go to the playground soon so she can practice hanging on the monkey bars.

At her doctor’s appointment on Wednesday, we learned that she is in perfect health (which we already knew). She is, according to their measurements, 20 pounds 10 ounces (9.36 kilograms) and 68.5 centimeters long. However, 68.5 centimeters is only about 27 inches, and she’s much taller than that, so I think she must have been wiggling too much. I measured her while she was asleep the other day, and even with her knees bent a bit, she was at least 30 inches. She’s so grown up.

PS I wrote this last week and held off sending it so I could check on her measurements. A further update: she understands hats and sunglasses. A few weeks ago, Dustin put on a baseball cap, and she started crying (apparently she didn’t like it). She has now gotten over that part. Last night, she found his sunglasses on the floor and put them up by her face. Wow! So I gave her a baseball cap, and she did the same. Her arms are too short to really get it on her head, but she’s definitely got the idea.