Throwing balls and running in circles—baseball is my kind of game. 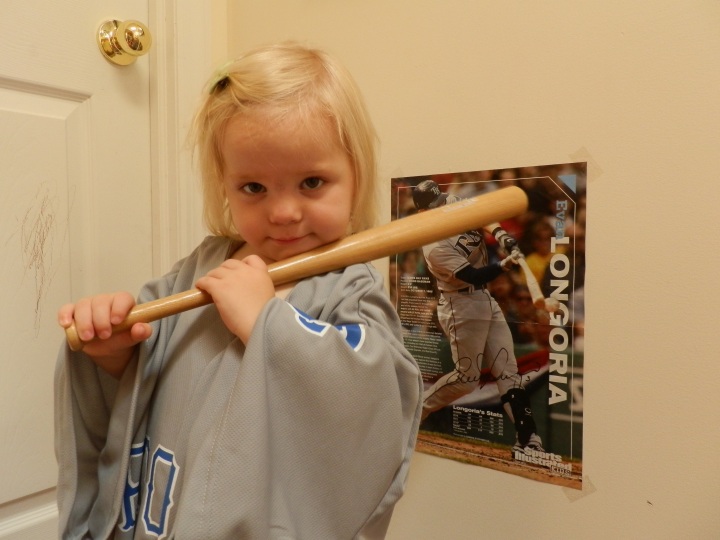 A few weeks ago, Mama and Daddy took me to a really fun thing called a baseball game. Daddy and I met Mama at her school and then took the subway a really, really long way to Coney Island. First we just walked around with Siby and Vinu, from Mama’s school, and looked at some of the games and rides that they have there. Then Daddy and Siby and Vinu went on a ride called the Cyclone. When they left, I didn’t really know what they were up to; Mama and I just went off to the side and stood in the shade and watched this little train go up and down and around in circles on a track way up in the air. But then we went back to the gate, and I saw Daddy sitting in the very front of that little train! I wanted to ride it, but I guess I’m not tall enough. Daddy says he’ll take me as soon as I grow two more feet. I’m hoping that will happen in the next few months.

Anyway, after that, we saw a few more rides and then went to the big building where the baseball game was. It looked cool before I even knew what it was, so I was happy that we went in. We found some seats where I could look out at the big green field. There were cup holders in front of every seat, so I moved my cup around to find the best place for it—deluxe! We got some blue hats, which I really like to wear around. There were lots of people from Mama’s school there, and they played with me and talked to me. We also had some food and drinks. Then there were some loud announcements and lots of cheering. I didn’t catch everything, but pretty soon, there were all these guys on the field wearing hats kind of like the ones we had and throwing a ball back and forth. I was excited to see a ball, since I know how to say that word.

When the game started, I went to sit with some of Mama’s friends. They told me how the whole game works. I’m not clear on all the details, but basically, it goes like this: There are two teams. One of the teams sends a guy to the middle of the field with a ball, and the other team sends a guy to stand in front of him with a stick called a bat. The guy in the middle throws the ball, and the guy in front swings the bat and tries to hit the ball and make it go a long way. If he hits it, he gets to run around until someone tags him. Then they try again. After a while, the teams switch places. It’s a really cool game.

Even though it’s cool, it was hard for me to pay attention the whole time, so sometimes I just talked to my new friends or played with Mama and Daddy. It was also fun to climb in and out of the chairs, because they fold up when you get out of them. Other than the actual game, one of the highlights of the evening was this big duck who went out on a balcony above us while a lady threw T-shirts at people. The duck would point at groups of people and they would shout and wave their arms, and the lady would throw a T-shirt. Mama held me up in the air so I could cheer, too, but I was mostly just watching the duck. He was really funny! I’ve never seen a duck that big. Somebody called him an eagle, whatever that is, and someone else said something about a “costume,” but I’m pretty sure it was a real duck. But the bad part was, after just a few minutes, he went away. I was so sad because he was so much fun to watch. I was pretty tired anyway, and the disappearance of the duck really didn’t help. I cried for a little while and Mama held me. I almost fell asleep, and then, suddenly, the game was over. We took the subway all the way home and I went to bed.

Now that I know what baseball is—and I can pronounce it, too—I understand my Sports Illustrated Kids a lot better. There are always pictures of baseball players swinging a bat or throwing a ball. I have two of them taped up on the wall by my room. I’ve also started practicing with Mama and Daddy. I can swing my arms like a bat. I haven’t hit anything yet, though. I think that’s the trickiest part of baseball. Oh, and that whole “catching” thing.

I love running around, laughing, cooking, riding the bus, riding my bike, going to the playground, riding carousels, pretending, reading books, going to school, playing with MetroCards, and going to church. But most of all I love my mom and dad and my little brother, Colin. Learn more » View all posts by Fiona