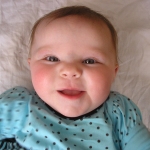 I’m told that this column should be about my thoughts on my first six months of life. I’m not really sure what a month is, or what “six” means, but I’ll give it a shot.

My first memory is of being warm and comfortable, and hearing Mama and Daddy telling me about how they planned to “bust me out of there.” I wasn’t sure that sounded all that great—I mean, it was a little cramped in there, but it wasn’t so bad. I just went to sleep and the next thing I knew, my warm, cozy space was gone and I was surrounded by lights, voices, cold air, and rough towels. Fortunately, I went right back to sleep in about five minutes.

Those first few days were a blur. I still slept a lot, but each nap was interrupted by some unpleasant experience. Sometimes it was a diaper change; other times I had to learn how to eat; and other times it was some sharp thing being stuck in my heel. I began to feel I had been born to baby torturers. After we left the hospital and came home, there was time for me to take it all in. We had some good times making faces at each other and playing games, which I hadn’t done before. Eventually, I realized that no matter how long or how loudly I protested the diaper changes, they weren’t going to stop.

I’ve made some discoveries and learned some things about myself. I found out, for example, that I have hands and that I can control where they go. I’ve gotten in touch with my inner self and identified some deep-seated fears, like the vacuum and the blender. There have been times I felt I was near starvation, and have been relieved to see that the bottle was ready just moments before I probably would have fainted in weakness. There was a moment of clarity when I realized that Mama and Daddy don’t cease to exist when they walk out of the room. I’ve also learned about a few adrenaline surges, like being tossed up in the air or having a toy almost dropped on my face, and had a few moments of abiding joy, like being tickled and bounced on Mama and Daddy’s bed, or the feeling of curling up in my fleece and falling asleep on my side after a long day. And, like any other baby, I have some dreams: typing on the keyboard while Mama and Daddy are working, crumpling up an entire newspaper, and putting that—whatever it is—in my mouth.

Okay, well, it’s time for me to go play with Dinky. And find out where my bottle is. It’s tough being in charge sometimes, but somebody’s got to do it.

I love running around, laughing, cooking, riding the bus, riding my bike, going to the playground, riding carousels, pretending, reading books, going to school, playing with MetroCards, and going to church. But most of all I love my mom and dad and my little brother, Colin. Learn more » View all posts by Fiona