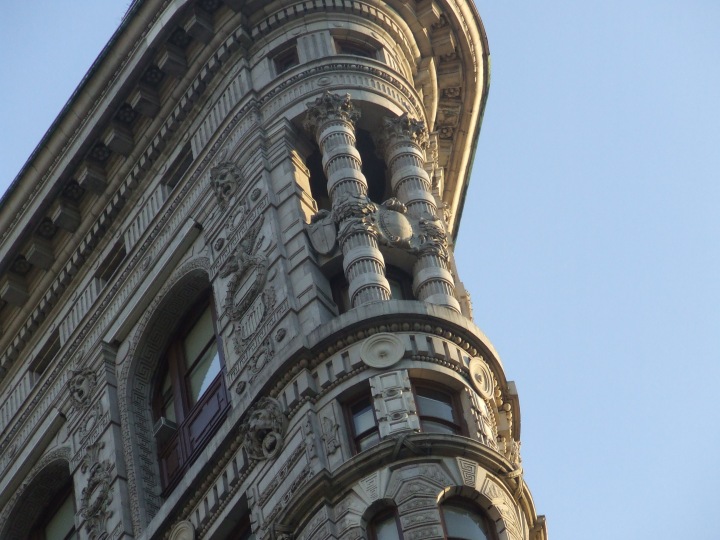 Around the world today, there are some monuments and buildings that are so famous, that seem so permanent and indelibly a part of the cities in which they stand, that it’s hard to imagine a time when they weren’t there, much less the controversy that surrounded them when they were built. Consider, for example, the Eiffel Tower in Paris, or the Vietnam Veterans Memorial here in Washington, D.C.

New York City’s Flatiron Building perhaps doesn’t have the renown of the Eiffel Tower or the Vietnam memorial, or even of its near neighbors, the Empire State Building and the Statue of Liberty. But it is nonetheless an icon of the Big Apple. And, yes, it was controversial from the moment it was announced.

This story is told in The Flatiron: The New York Landmark and the Incomparable City that Arose with It by Alice Sparberg Alexiou. In the prologue to her work, Ms. Alexiou reveals a personal connection to the Flatiron: her family once owned it—or, at least, a share of it. But just as her connection to the building drove her to write this 272-page history of its creation, lovers of New York and its history should be driven to read this book because of the Flatiron’s multiple connections to the people and forces that forged one of the world’s greatest cities into the place it is today.

One of these forces, Harry Black—the man behind the Flatiron’s creation—is the real subject of this book. If anything, The Flatiron is his biography, tracing this larger-than-life character from his marriage into the family of George Fuller in 1894 to his unfortunate death in July 1930, in the aftermath of the previous October’s stock-market crash. (The Flatiron Building, originally called the Fuller Building—a name given to it by its builders that the public has never used—was built to be the headquarters of the Fuller Company, once the world’s largest construction company, founded by Fuller and later controlled by his son-in-law Black.)

Even if Black is the book’s central character, it is difficult, if not impossible, to call him the protagonist. From his crooked business dealings to his betrayal of his first wife, Allon, and his self-serving cavorting with various women after their divorce, it is clear that pride was the ruling force in his life, with very few other redeeming qualities. The way he lived his life is summarized well by Ms. Alexiou in the volume’s closing pages:

One [of Black’s friends] told a newspaper reporter that Black had no hobbies “to make the prospect of further life pleasant. Harry Black did not play cards or indulge in any other sport. He spent five days a week at the office.” Another friend remarked: “There is no puzzle about it. Black had betrayed and lost every friend he had. What else could he do but kill himself?” (Page 255.)

The other subject of Ms. Alexiou’s tome is, perhaps, change. If The Flatiron were the script for a play, Harry Black would be the star, and the Flatiron Building would be the narrator—the character whose story frames up the real tale being told. The set would be New York, with a multitude of endlessly moving and changing parts. For all the talk then and now that New York is a city built by money and finance, it is really a city built by change. New York doesn’t just accept change; it embraces and thrives on it. From the micro—the demolition of the buildings on “Eno’s flatiron” (the block bounded by Broadway, Fifth Avenue, and 22nd and 23rd streets; the story of Colonel Proskey on pages 55 to 58 is not to be missed) to make way for the Flatiron—to the macro—the continuing cycle of New York’s real-estate booms and busts and the start of the Great Depression in 1929—this story is a story of change.

Ms. Alexiou’s greatest faults were probably committed by her editors: sometimes this book doesn’t have the tightest writing and editing. (For example, the last name of one of Black’s lovers is Oelrichs—with an s—but page 248 refers to “Oelrich’s funeral,” a minor mistake that should be easily avoided.) The title, too, is perhaps a bit misleading; this really is the story of “The New York landmark and the man who arose with it—and fell.” But all in all, this is a well-written, delightful read about one of the most authentically American icons in our nation’s landscape.